The Diagram - exhibition at Banner Repeater

The diagram is not a representation of something else, it is the thing itself (1) .

The diagram has the capacity to represent a wide variety of information, such as text, illustration, graphic techniques, notation, and music scores, indicating temporality. A variety of different methods of representation, all of which draw attention to a correlatory affect that occurs in the comprehension of the multiple representations of information; a knowledge of the other circumstances which one does not see. The contextual arrangements allow for a sophisticated inter-relational complexity to develop.

Users of diagrams, unlike viewers, are functional components inseperable from the system in which they are imbricated................ this is not a fixed subjectivity, but a component in a dynamic system of meaning (2).

A series of live in-public conversation is staged with exhibitors inside a host of vacant gallery spaces, which trace the artist's imminent response to or within each site prior to the installation of their exhibition.

The Interviewer's Notebook employs drawing as a diagrammatic tool through which to test the relation between language and the visual, in a process of making. An accumulative infrastructure of lines and text develop the temporal and architectural significance of The Empty Gallery Interviews as both proposition and performative action.

Charbel Ackerman's Island Block is an interactive architectural model of the Greater London Council building built in 1973 at the roundabout between Westminster Bridge, St Thomas' Hospital, Waterloo Station and County Hall. The floors of the model plan chest hold drawers full of images, documents and interviews with the architects, and may be consulted by the viewer.

The hexagonal office block was intended to house 1,500 council staff, but after the abolition of the GLC in 1986, stood empty for two decades until its demolition in 2007.

The model produced to present the architects vision prior to building, acts as a sarcophagus to its architectural legacy and short-lived history.

Patrick Coyle's two-part work 'holding this objecty', has a device-like quality, comprised of a small spiral of yellow sandpaper, and a letter outlining how best to display the work, and documentation of previous exhibitions. The letter will be available in the reading room to take away, and the artist will be resident at Banner Repeater on the 16th of October, for a re-making of the objecty.

In the reading room, Lizzy Whirrity with translator Dave Mercer, will performatively transcribe The Great Gatsby, by F Scott Fitzgerald, through language filters such as 'shorthand' and by so doing, render a new form to the text. 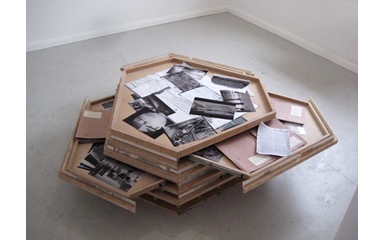 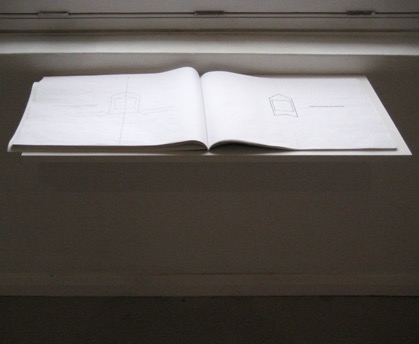