William Raban has been making a new film ‘ABOUT NOW MMX’ as part of his artist in residency at the Balfron Tower. The film constructs a cinematic map to reveal connections between the various architectural, transport and social networks that constitute the city of London.

About Now MMX is both Raban’s attempt to resolve the difficulty of rendering 3-dimensional space and perspective on the flat surface of the screen and a visual exploration of the current economic crisis gripping London. What does economic recession look like? How does it manifest itself on the streets and what is its impact on the skyline? The film is shot from a window on the 21st floor of Balfron Tower encompassing a panoramic view of the city below. Shot on 35mm, Recession was filmed over a duration of three months and uses time-lapse techniques to constantly track the movements of the city and its inhabitants. Raban’s intention is to create a cinematic map of London that exposes the neural networks of our post-modern metropolis; to produce a film that reveals the workings of London’s nervous system. William Raban started making films whist he was studying painting at Saint Martin’s School of Art in 1970. He has since made more than forty films, many of which feature London as their subject. William lives and works in East London. He is currently Reader in Film at the University of the Arts London.

The exhibition opening on 22nd January includes film rushes, photographic collages and notes from the project as well as drawings and film produced as part of the residency’s community outreach programme.

William is the second artist to have a Bow Arts Trust residency in Flat 123 Balfron Tower. Residencies are for 3 months culminating in an event or exhibition.
The residency is made possible through the partnership between the Bow Arts Trust and Polar HARCA. 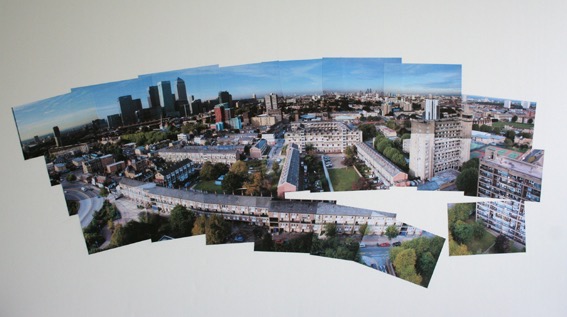