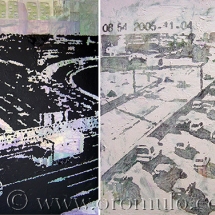 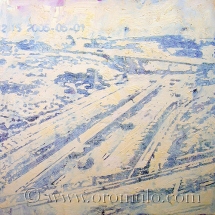 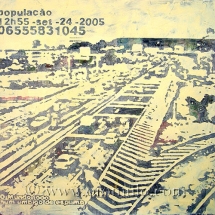 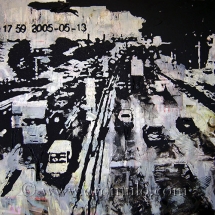 This is a serie of works that touches the idea that the world is progressing towards some kind of destruction or salvation. Our natural environment is being destroyed at a phenomenal speed by poisonous industrial waste, the amount of traffic has increased like a cancer, and there have been technological disasters of   unprecedented, apocalyptic proportions – such as the nuclear catastrophes of Chernobyl. A third of mankind is suffering from hunger and starvation and a fifth are living in luxury, and human beings are becoming increasingly aggressive towards each others. In a daily bases the mass media - itself a product of our technological age – brings news of all these reality straight into our homes. As result, people are better informed but at the same time they have become less sensitive and their perception has been blurred.  These images are taken directly from the internet traffic control system and therefore we may feel that this mechanically and electronically produced reality is a kind of theatrical spectacle which is far more exciting than daily life and reality itself.  I used a thick matter with oil paint on canvas to suggest that there is always going to be a link between the reality we perceive and the real object – the concreteness of reality.