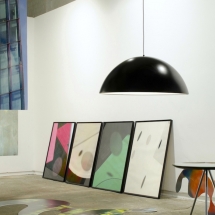 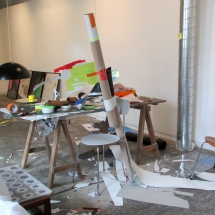 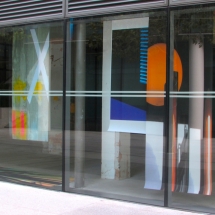 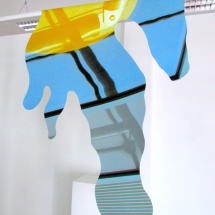 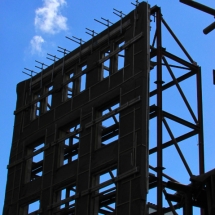 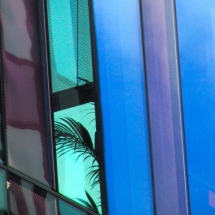 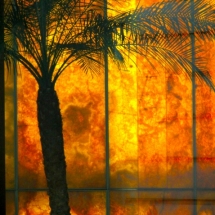 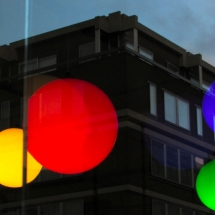 STUDIOFFICES  & STUDIOCITIES A M Hanson's ongoing lens based projects investigates how offices and related spaces (such as vast, glossy, empty foyers and atriums) can be readapted to illuminate post contemporary conditions, other creative production or fantasy usage. How the city itself is forever a studio. Though the best kind of studio being the best frame of mind. These ideas are evoked in print series and larger scale photo and film installations, often incorporating architectural and interior features. Modified ready made furniture with applied prints and objects form a series of 'photo sets' with suspended backlit film strips of extracted city as studio details. The correlated strand of production for this project also includes photo montages, works on paper and photo objects which return the thematic source material back to the studio in new layered formations. Films are created as fluid and fixed backdrops, as stand out conceptual or narrative exploratory mise en scène motifs. The idea that the city and studio are fluid even when fixed is key, adapting in and out of itself. All the better for the solitude and collaboration of ideas and production in changing space and times.

​interior, light, shade (solo show, Regent's Place Plaza, London. oct 2014). Oversized blind like duratran prints set in windows at the base of the Euston Tower mirror scenarios and exaggerate motifs and forms in the windows of the surrounding office towers​. info: http://www.regentsplace.com/news/an-office-photo-garden-in-october

2018 new related project and associated material across media coming up