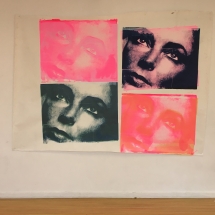 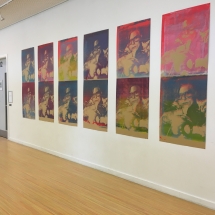 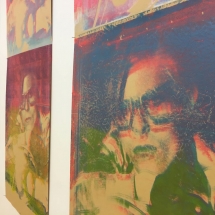 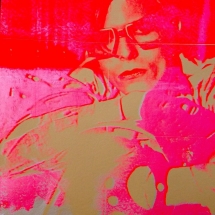 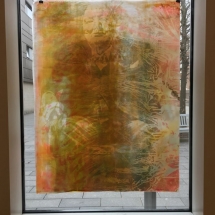 The exhibition of work lends its title from Friedrich Nietzsche's publication 'Gotzen-Dammerung' (translating as Twilight of the Idols) and in the same sense that he addressed culture of the day so too does L. A. Macdonald, by examining culture and the lasting legacy of icons. The works delve into the myth of fame, link the viewer with the humanity and tragedy of past events. MacDonald's work forms a bridge spanning the void between public images and private lives, celebrity and intimacy. Subj​ects such as the death of Donald Campbell captured in Bluebird's moment of crashing; John Lennon captured giving an autograph to his killer moments before he killed him and the confident iconic Marilyn Monroe contrasted by her lonely death. L. A. MacDonald's images are screen prints on found paper including tissue, photographic studio backdrops and used cardboard boxes. They are nostalgic works screen-printed with obvious references to Warhol and the 1960s; the colours are strong and vibrant in contrast to the grainless of the original photographs. These images are made potent again, despite the familiarity of the originals. Perhaps this is because of the contrast between the simplicity and physical vulnerability of the objects made, and the very strong subjects. The work is often made of intense apocalyptic colour applied to such delicate, thin layers of tissue paper.​