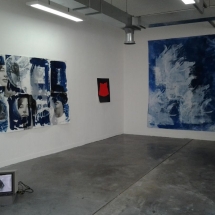 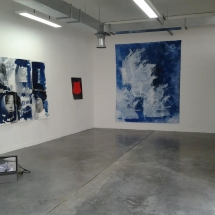 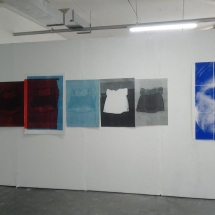 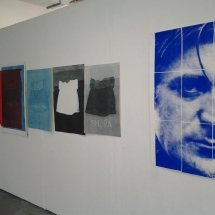 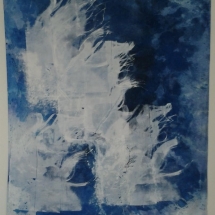 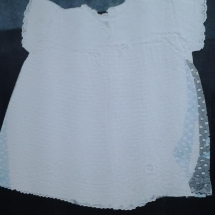 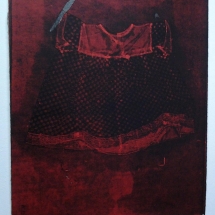 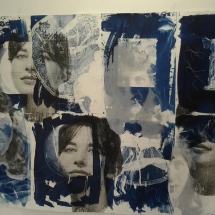 Whilst the poets Ted Hughes and Sylvia Plath were married Ted began an affair with a woman called Assia Wevell. Devastated by the discovery of the affair the couple separated and a few months later Plath committed suicide by putting her head in the gas oven. Before doing this she sealed up the bedroom door of her two children to make sure they were not affected by the fumes.

As Sylvia Plath`s reputation grew after her death, it was said that Assia seemed to be haunted by the specter of Plath. Although Assia and Hughes had a daughter together called Shura, their relationship began to deteriorate and he began to see other women. Assia re-enacted Plath`s suicide by gassing herself and Shura.

The starting point for my work was Shura and the reasons for her death. The baby dress in the prints was once worn by me.  as Shura and I would have been contemporaries, it seemed right to use it to represent her, My mother who had died when I was a child, kept my dress, then I kept it for another 30 years with out really knowing why. Making these prints ruined the dress but it felt like a cathartic thing to do.

The commercial sea witches was directed and devised by Assia and is a parody of the Greek myth of the sirens. In the commercial the sirens destroy men with their dyed hair. the largest piece of work is a screen print of my hair. I feel the 1966 advert and the use of Greek tragedy seems to tie in with the tragedy of Shura, Plath, Assia and Hughes as a kind of foreshadowing.