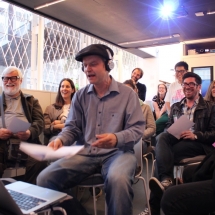 A performance that brought together musicians and audiences from Brazil and the UK for an experimental live performance of songs censored in both countries between 1964-1985. These dates mark the duration of the military dictatorship in Brazil. The music performed included songs by the Beatles, Chico Buarque, Frankie Goes to Hollywood, Gilberto Gil, the Sex Pistols, Caetano Veloso and more. Contra Band was commissioned by UP Projects, Somewhere and Live Art Development Agency for the Floating Cinema 2014 Extra-International programme, London, and Casa 24, Rio de Janeiro. Duration 60'00".