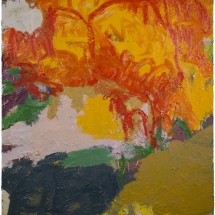 Le Pave D’Orsay  presents the work of Australian painter Anthony White in his first Parisian solo show.Drawing from diverse travels from the Leipzig winter of 2010 to the initial experience on artist studio residency in Paris from 2009,the Paris based non-profit Le Pave D’Orsay presents a survey of the artist’s practice from the years 2008- 2014 including collages,paintings and two distinct strands of abstraction. This broad overview of twenty two pieces encompass work that the artist has completed whilst on residency programmes throught out the United States and Europe.

White has been exhibiting internationally in over 35 group shows since 2006 including The Cat Street Gallery – Hong Kong, Tim Olsen Gallery – Sydney and the COMODAA Gallery in London.

White’s work has been well received by the art world and widely collected. As the recipient of the Marten Bequest Travelling Scholarship during 2007 he participated in further study at the New York Studio School,NY.  He has also received new work commissions for the costume designer Catherine Martin.

Vernissage Thursday the 2nd of October 2014