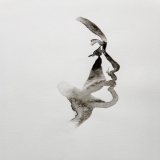 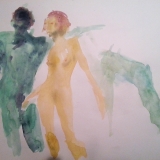 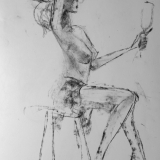 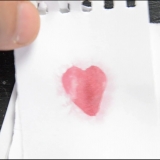 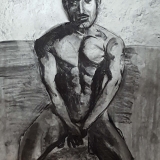 Actor, artist, playwright and photographer. Studied foundation art at DeMontfort University (1991/2) then London Academy of Music and Dramatic Art (1994/7). Returned to painting in 2010 after private study. Zubairi has continued to paint responsively to his source material, mixing spoken word with figurative narratives. In 2014 his work with minimalist abstracted watercolours was chosen for a month-long solo show at Blend Gallery which was then selected for exhibition at Clapham Library. In 2011 he fused his theatrical work with painting in 'Skylarking' for the North Devon Fringe Festival and 'Unbroken Line' (Ovalhouse Theatre, 2012) and in collaboration with actress/painter Sioned Jones to create 'Expectations' (Ovalhouse 2014) using painting to further the narrative of the play. Interestingly in 2014 his figurative painting and performance work fused beautifully in collaboration with musician Chrissie Hynde's music as his performance painting became the backdrop to her music video for 'Adding The Blue'.

Currently Zubairi is working on more performance pieces and short video sequences, alongside his painting and photographic practice