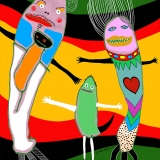 2012 Member of AOI –the Association of Illustrators, UK

2011 BBC big screen East London-some of my work has been featured and made into a short slot for BBC East London, UK