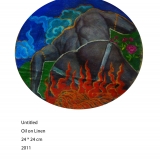 Yinjie Graduated from the China Academy of Art and Central Saint Martins College of Art for Fine Art, Yinjie exhibits extensively both throughout the UK and internationally, his work has been exhibited in V&A, Today Art Museum in Beijing, The Sunshine Art Museum in China, and his work has appeared in numerous publications, and is represented in public and private collections in Britain and worldwide.  Yinjie focuses on the following key themes in his work: Life in China, friends, poetry, and opera.  In his point of view, art is elevated and his artworks should represent the aesthetic and philosophic value of art.  Sun's poetic depiction of his hometwon's paintings speaks to the heart. Sun inherits traditional skills from old masters' paintings; he also integrates a lot of new painting techniques into his works, giving modern life humane care which is rarely found in many modern works.