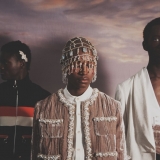 Grace Wales Bonner graduated from Central Saint Martins in 2014 as winner of the L’Oreal Professionnel Designer of the Year Award, a show described as “truly original” by the Sunday Times. Scouted by Lulu Kennedy to present her first collection as the “rising star of menswear” at the Fashion East installations Grace debuted “Ebonics” in London to critical acclaim. Susanne Madsen from Dazed wrote; “Her poetic A/W 15 presentation at Fashion East snapped you wide awake with its complex ideas about black representation”.

Wales Bonners designs are routed in critical thinking and redefining the role of black masculinity, combining couture techniques with traditional African crafts, an exploration that also saw the collection presented at the Victoria and Albert Museum later in the year.

Wales Bonner’s summer collection considers Malik Ambar’s passage, from a destitute in Ethiopia, to a ruler in Western India. Malik expands the diasporic image from one of movement to one of creation. James Baldwin becomes a central parallel to contemplate, in his unusualness. The black male here performs as an image of transcendence that bridges divides of status and origin, to create a new real. Malik becomes a reflection on the unexpected - an expression of the cross-cultural resonance that characterizes the African diaspora across the Indian Ocean and further.

A Prince found in cowrie skullcap and rare gemstone.

Everythings for Real: Volume 2 created in collaboration with Jamie Andrew Reid and Ditto Press, is previewed for the first time at the presentation. The book comprised of abstracted text and collage, explores the rhythm of black love and the African echoes across the Indian Ocean. The soundscape inspired by recordings from Wales Bonner’s recent research trip to Dakar was composed by James William Blades.