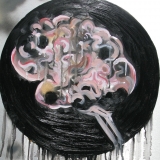 Victoria Playford is a London based artist, whose paintings examine modes of story telling and reconstructions of the past. Taking historic and contemporary events as a subject matter, she has been exploring the evolution of mental health facilities and their historical social dynamics.

Currently interested in the relationship and attitudes towards the mentally ill, Victoria Playford’s artworks have explored the brutality and vulnerability of the human condition. The ‘self’ being capable of both the brightest and darkest acts.

This has evoked a series of paintings in which every element is a deliberately chosen ingredient telling part of a story.