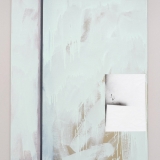 I am a practicing painter living in London since 1996. I studied at Chelsea College of Art and Design (1996-1999).
Since 2011 I have been a member and studio holder at Cubitt studios in Angel. I play an active role in the cooperative. I have served on the gallery committee, helped with he installation of shows for the curatorial fellows. In our 25th anniversary year (2016) I initiated a series of informal events in the studios titled Salons. These brought together studio holders and members of the education and gallery teams as well as the public in our project space, studio 5. Events included drag cabaret, artist talks, presentations of work by studio holders and invited artists and a live music event where Cubitt hosted experimental record label Trestle records.
I was also active in the organisation of Cubittt's first ever open studios.
I am an art tech as well as a painter, currently working freelance; previously I was head tech at Raven Row in E1.