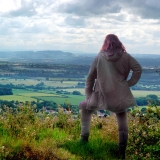 In my long-term project ‘Talking With Vikings’, I am dealing with language, investigating the similarities that I find with my Norwegian dialect and the English Black Country speech. The initial part of this work was an exhibition called ‘Shadows’, at the Light-House Gallery, Wolverhampton where I made a site-specific sound installation bringing these two dialects together. The installation created a space where the viewer could examine the play and rhythms in the recorded dialogues. I am currently working on the second phase of the project called the Clent Expedition which seek to build a multi dimensional and in-depth topographical representation of the area, its people and its history.

Current Clent Expedition: ongoing project exploring the bounderies
between past and present, History and fixtion, as well as lived and
represented reality.