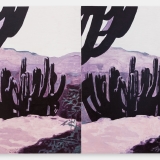 I explore the way in which the 20th century male figure has been fetishized and mythologised by contemporary culture and consumerism. Due to a perceived loss of masculinity in a post industrial capitalist realm, with an increasing focus and popularity of male grooming and interest in fashion, previously viewed to be feminine activities, “manliness” or perceived manliness has arguably become a superficial aspiration or fashionable look versus a lifestyle.

I try to engage this by painting male icons predominantly from the 20th century, drawing on imagery from films, adverts and family photographs. This allows me to blur the lines with regards to authenticity and reality, and demonstrate my concept of the mythical MAN, presenting them as saint like figures carrying out a task or action, already many times rehearsed and learned from the original film, photo or story.
My work also focuses on how such industries as advertising have used imagery related to masculinity, such as the ideas of adventure, survival and harsh wilderness to sell products. Recreating fashion adverts through drawing and collage, by removing the text and juxtaposing previously unrelated imagery, creating quite ambiguous pieces which have a sense of their own narrative.