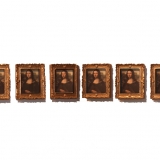 Theresa Bruno is a conceptual artist who works predominantly with found phenomenon. Her practice is primarily engaged with appropriation; using objects and semiotics to generate frames which allow the viewer to break down and challenge the structures which form their daily lives. She is heavily influenced by western consumerism; this being the main thread throughout her work. Playing with surface, she encourages her audience to re-examine what and how they consume. This critical dialogue creates a higher level of perception and awareness when exploring our relationship with 'things'. Recently her practice has become situation based; creating objects which co-exist with the environments they are exhibited in. The base of her research includes a multitude of topics; at present she is investigating globalisation, ideology, and the ephemeral.

'The Mona Lisa', 2011, a row of miniature mass produced framed prints, has been specifically created for the DEBUT contemporary gallery. Asked to make an object for a commercial space; she created a piece which allows her viewer to look at the art object in context. It questions many aspects of the art world; for example accessibility, value, authenticity, art as commodity. The objects existence within a commercial space questions it's own validity.

At her degree show for Wimbledon 2010 she created 'Photocopyright 2010'; which challenges the ideological structures of an art student by illegally photocopying a whole book concerning copyright then remaking it back into a book. This new object contains an ironic paradox within its conceptual framework. The content within itself, disallows its own existence. Exhibited on a chain the 'NOT TO BE TAKEN AWAY' sticker signifies the artists right of ownership over the original library shelf. This piece questions ownership and the limitations of an artist working in found materials.

In 'Fruit bowl painting 2010' she alphabetically appropriated paint colour samples named after fruit to create a clinical colour chart. The viewer is led to question how marketing concepts are used to promote escapism through ideological structures surrounding domesticity. They are also prompted to re-engage with the historical traditions of the still life, and to reconsider their relationships with existing conceptual labels, for example 'the apple'.
Overall she wants her viewer to question where and how their life fits into each piece. To create a higher sense of critical vision which enables them to digest their daily life differently. To challenge ideologies, reality and the in-between - themselves.