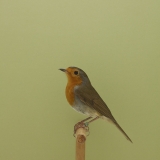 Life in Britain and the British psyche are at the core of Lukes work. He photographs what to many epitomises the eccentricity of Britain. Often humorous in their outlook, his series range from prize budgerigars to the World Beard and Moustache Championships. Whether animate or inanimate objects, Stephenson creates affectionate portraits of his subjects and documents worlds often hidden from the mainstream.

He graduated in 2005 and has worked as a freelance photographer since. The same year he was awarded the Jerwood Photography Prize and in 2006 was selected as one of ten photographers to showcase their work at the International Festival of Fashion and Photography at Hyeres, France.

Luke has published three photo books to date , his first was a series of Show Birds published in 2012 and the second published in 2014 is a series exploring the wonderful world of the 99 ice cream. The Third is a book celebrate the beauty of the English Rose.