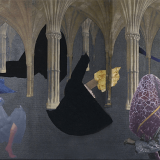 Sarah graduated from the Royal College of Art in 2015, gaining an MA Printmaking with Distinction. In the same year she was shortlisted for the Intellect Publishing Prize for her dissertation ‘Sea shells, silk sails and the parabolic etching of the night sky’. Whilst studying, in 2012 she received the Tim Mara RCA award, resulting in an artist residency and exhibition in Canada, and in 2013 she was awarded the Pushing Print Solo Prize, developing a solo exhibition for the Margate Gallery.

In 2016 she presented 'Quarry', a solo show at Brocket Gallery exploring Paolo Uccello's 1470 masterpiece 'The Hunt in the Forest'. Her current body of work is in response to the Dark Matter research being undertaken at the Boulby Underground Laboratory, presented in April 2017 as one of Yinka Shonibare's Guest Projects.