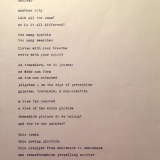 "the game of shifting mirrors" 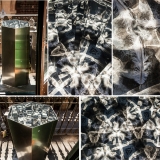 samina virani (born march 10, 1980) earned her bsc in culture and politics at georgetown university’s school of foreign service, specializing in cultural anthropology, post modern philosophy and semiotics. in 2011 she studied at teatro de los sentidos in barcelona where she learned the distillation of the senses, exploring corporal and sensorial communication, and the poetics of play and silence.

in 2016 she was invited to attend a one semester studio residency at the MFA program of bezalel academy of arts in tel aviv, supported by the anglo-israel association.

the essence of her work is rooted in deconstruction and an esoteric inquiry about inner journeys and transformations. as she seeks to unfold the conundrums of life into a landscape of magical realism, she finds her expressions through poetics, the development of theories, and experimental theater.

through her study of the senses, she designs scenarios traversing the boundaries of theater, blurring the distinction between creator and spectators, and allowing viewers to become explorers. by using whimsical metaphors, she deconstructs through play.

she creates poetic texts as transcriptions of this, repurposed in film scripts, voice overs and integrated in her installations.

samina's work has been influenced by years of extensive travel projects, where she deconstructs myth and storytelling, immersing herself in local rituals and traditions of peoples around the world. some have included the peruvian and colombia amazon, the masai mara, costa rica’s jungle, and the israel and jordanian desert.

samina is regularly asked to lecture in academic and art institutions about deconstructive theory, her research methodologies, and her own theory called “topsy turvy consciousness” – a detangling approach to society’s constructs. her most recent workshops have taken place at the institute of european design in barcelona and bezalel academy of arts in jerusalem.

embracing collaborations between artists of different mediums, she aspires to opens gateways and inspirations that expand the collective dialogue about wonderland. to support this vision, she founded the international residency program, “the rabbit hole.”