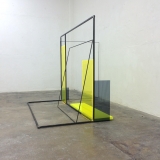 Rosalind Davis is an artist whose central concern is the transformation of space through the disciplines of drawing, painting, sculpture and installation. Beginning with the rationalised and objective geometries of architecture Davis creates a multifaceted set of spaces; re-visualizing, constructing and reconfiguring architectural elements to create multi-dimensional environments. Her paintings and drawings act as a starting point that connect and disconnect both physical and psychological boundaries, where complex interior and exterior spaces are collaged together and abstracted. Threads often intervene in her works; their tautness dissecting boundaries and creating shattered geometric planes, the imagery being literally pinned down, sewn up and threaded together. The use of thread often traditionally refers to the feminine and domestic activity of making, repair and creation but here consciously punctures the predominant male domain and hard edged aesthetics of modernist architecture, geometric abstraction and design.

The related modular sculptures physicalize and expand the experiential element of the paintings. Using steel frameworks, luminous perspex sheets, thread and painted canvases they act as an architectonic model that the viewer can navigate and compose for themselves. The installations, as with the paintings have a disorienting and subjective character, establishing a relationship between the personal and the systematic. This highlights a disparity between the imagined and real re-claiming the failed ideals of modernist space, intimating a more personalised space of one’s own creation.

Rosalind Davis is an artist-curator and a graduate of The Royal College of Art (2005) and Chelsea College of Art (2003).
As an artist Davis has exhibited nationally and internationally in a wide range of galleries and has had a number of solo shows in London: the Bruce Castle Museum (2013); John Jones Project Space; Julian Hartnoll Gallery (2009); The Residence Gallery (2007) and The Stephen Lawrence Centre. Selected group exhibitions have been at the Courtauld Institute; Arthouse1; Standpoint Gallery; Transition Gallery; The Roundhouse; Phoenix Brighton; APT Gallery; the Lion and Lamb Gallery; The ING Discerning Eye; the Lynn Painters Stainers Prize. Her work is held in a number of private collections and a public collection. She is also a member of the Undead Painters.

Davis was appointed permanent Curator at Collyer Bristow Gallery in 2016 and all her exhibitions there have been reviewed by Art Top 10; ‘Cracking Show. Superb Artists. Brilliantly curated.’ Davis has co-directed and developed two innovative artists’ educational, membership and exhibition arts organizations; Zeitgeist Arts Projects (ZAP 2012-15) and Core Gallery (2009-11,) based in South East London. Previous co-curatorial projects have been at Standpoint Gallery, Arthouse1, Geddes Gallery and with ZAP at Bond House Gallery (ASC).

Davis is co-author of ‘What they didn’t teach you at art school’ commissioned by Octopus Books which is internationally distributed across the world and has written a number of articles for a-n and other arts publications. She lectures at universities, galleries and organisations across the country including the RCA, ICA, Camden Arts Centre. University of the Arts and for Artquest. She was also an Ambassador and curatorial mentor for UK Young Artists. (2016)