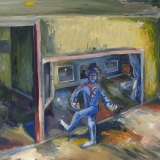 Robbie’s art practice stems from the opportunity art allows for us to express something that cannot be clearly uttered, and may even be insignificant if uttered which is why a visual art practice is such a great aid in connecting people and thoughts. Robbie is interested in painting as a way of transference and sending a poetic message rather than confrontation or statement. Yet many themes find its way into painting.

Having graduated from University of Hertfordshire, Robbie has been selected as artist for Bloomberg New Contemporaries 2017, and continues to make new work and exhibit around the UK.