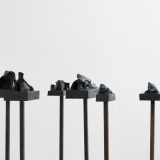 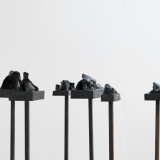 Stone is a London based artist who received an MA from Central Saint Martins. He is included in the museum exhibition Nature Morte, curated by Michael Petry, currently touring to Ha gamle prestegard, Norway, 2015, Sweden, 2016, Belgium, 2017, returning to London in 2018. Stone is the recipient of numerous awards and prizes including an Arts Council England award for a significant phase of research and development (2013) as well as a Scholarship at Fonderia Mariana, Italy (2014) awarded by the Royal British Society of Sculptors and the Brian Mercer Charitable Trust. In 2012 he was a finalist for Anthology at CHARLIE SMITH London and shortlisted for the Beers Contemporary Art Award. In 2011 he was selected for The Threadneedle Prize for Painting and Sculpture. Recent works are included in Nature Morte, by Michael Petry, published by Thames & Hudson, Hirmer and Ludion (2013). His works are also in collections in the UK, Europe and United States.