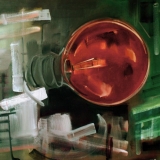 Born in Turin, Italy, in 1976, Pietro Reviglio has exhibited in the United States, Italy, Japan and the United Kingdom. He studied painting at the Art Students League of New York with Robert Cenedella and Mary Beth McKenzie. He is alumnus of the Graduate School of Arts and Sciences of Columbia University, New York, where he gained a Ph.D. in Astrophysics in 2008.

His work experiments with the physical process of image formation and perception, visual narrative and the kinematics of images, exploring the borderline between the rational and the irrational, the conceptual and the physical, the oneiric and the cosmological.

He currently collaborates with King's College on a number of joint projects.