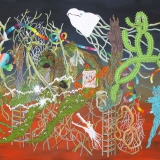 Rebecca Hunt is an artist and author living in east London. She graduated with a First Class degree from Central Saint Martins College of Art and Design in 2002, and has exhibited paintings in numerous exhibitions in the UK. She was selected as one of 18 artists and writers to join the Arctic Circle residency in October 2011, an annual expeditionary programe aboard a traditional ice-class sailing vessel in the International territory of Svalbard which voyages to the High Arctic. Her first novel 'Mr Chartwell' has currently been published in ten countries, including;
Fig Tree, Penguin UK, in October 2010, Random House in the USA in February 2011, as well as publishing houses in Germany, France, Italy, Canada, Brazil, Poland, and The Netherlands
'Mr Chartwell' was chosen and read by BBC Radio 4 as a 'Book At Bedtime' in October 2010. It was shortlisted for Newcomer of the Year at the Galaxy National Book Awards, longlisted for The Guardian First Book Award, selected as one of the 'Books of the Year' by The Independent, The Guardian, and The Evening Standard, and chosen by TheMillions.com as one of the 'Most anticipated books of 2011.' 'Mr Chartwell' has also been nominated by QPBC as one of their New Voices In Fiction, and is the winner of the Coventry Word of Mouth award. Rebecca participated in the Edinburgh Book Festival in August 2011 along with various other literary events, and The Culture Show selected her as one of their '12 best new novelists' for BBC 2 as part of World Book Night, March 2011. She is currently writing her second novel and preparing for an exhibition at the JM London gallery in May 2012.

Kathryn Stockett, author of 'The Help': Mr Chartwell by Rebecca Hunt: A clever, entertaining, and deliciously literary novel that literally personifies Winston Churchill's 'black dog' of melancholy. It is dark comedy at its finest.