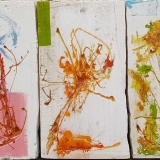 Raul Gabriel THE GLORIOUS NOTHING PROJECT 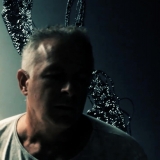 Raul Gabriel is an Italian Argentine artist who lives and works between Milan and London. He exhibits in public and private spaces in Italy and elsewhere and his works are found in numerous collections public and private. His exhibitions include major installations and deep investigations on the nature of space.
After an early period dedicated to experimentation in music, in jazz, he began to focus on visual arts travelling to Milan initially where he set up his first studio. He then moved to London for a period of residence before returning to Italy where he has exhibited frequently at numerous solo exhibitions.
One of the main themes explores is the human figure as a material being that both evokes and creates energy and passion but is also in a constant state of flux, emerging and retreating in turn. In some of his work he uses materials like bitumen, a building material, that possess an inherent physicality. The layered surface becomes strongly textured as the material solidifies. This infuses the work with a physicality that draws the viewer in, inviting examination of the material itself and its interplay with light at one level while remaining a medium for expression at another. As always presenting the layered meanings and paradoxes that form Gabriel’s natural milieu.
‘Pittura Feroce’
The works on display here are from three series of works Gabriel has developed: the “Pittura Feroce” or ‘Fierce Painting’ series, the ‘Writing’ series and the ‘ZOO’ series. These are all works on canvas that have an intensity that immediately captivates the viewer. The themes are interlinked and interwoven with Gabriel’s artistic development and are themes that are central and enduring in Gabriel’s work – the physicality of existence, the ambiguities of identity, the primacy of energy, the materiality of being while also emphasizing that art has a form of semantic reality, a form of writing but without formalised syntactical rules or grammar but capable of conveying meaning nontheless. The work here from his ‘Writing’ series make reference to this although without providing anything more than tantalising clues as to the nature of this ‘writing’.
The ‘ZOO’
The ‘ZOO’ series has been developed in parallel to the ‘Writing’ series and other works. These are strong images, predominantly pools of colour or of black or white in distorted but recognisable shapes. They are explorations of light in relation to form and meaning. Each image has sufficient representational structure to be recognisable but yet is sufficiently distorted to allow the viewers gaze and imagination to explore its possibilities. Their statement seems simplified and primeval but becomes complex on closer inspection as the textures of the surface and the reflection of light on the corrugations of the surface texture steal the viewer’s attention. The lens of perception adjusts with the distance of observation.
‘LUCEBUIO’
Some of the ‘ZOO’ images and the ‘Writing’ images were displayed in Gabriel’s superb 2017 exhibition, LUCEBUIO, at the Museo Diocesano in Tortona, Italy alongside images from the Italian Divisionists from the early 20th century as well as some earlier sacred art, in a study of the nature of light and darkness. Here, Gabriel’s works were juxtaposed with Divisionist images in an artistic dialogue to illustrate the connectedness of these very different techniques. Similarly, the juxtaposition with sacred art from much earlier also showed this strong connection due in part to the handling of light and dark and in part to the intentionality of the imagery.
The black images, in particular, are interesting in this study. True black is the absence of reflected light: all light is absorbed and none escapes. But this nevertheless outlines a form in the visual panorama, a shape in visual space, and, in itself, paradoxically, a ‘colour’ in our perception that is the absence of colour. In material things black, as we know it, can be a highly reflective surface however, displaying the chromatic properties of matter rather than electromagnetism.
In his introduction to LUCEBUIO exhibition, Paolo Bolpagni, Director, Ragghianti Foundation for Arts, Lucca, Italy writes:
Paradoxically, therefore, it is in the Black paintings that we can see a meticulous study of the rendering of the phenomenon of light and its specific nature, in which a theoretical kinship can be identified with the Divisionists’ research and methods. Firstly, Raul Gabriel reminds us that black does not exist in painting but rather that there are many possible and different blacks. The use of the term, moreover, is conventional: given that the “black body” is an ideal object of physics, which absorbs all incident electromagnetic radiation without reflecting it, that is, absorbing it entirely, it must be said that we do not find perfectly “black” bodies in nature. The energy of photons, transferred to the electrons, atoms and molecules of a material, is always “returned” through refraction: the difference between a very dark colour and a light one lies in the percentage of electromagnetic radiation that is reflected from the object, rather low in the first case and high in the second. It should not therefore be surprising that Raul Gabriel’s Black paintings are more “rich in light” than might be expected, as well as internally diversified by the degree of opacity.

The pictorial problem tackled in these canvasses is not so dissimilar from that posed by the Neo-impressionists and the Divisionists trying to increase – through the combination of little brushstrokes of pure colours – the luminosity of their works. It is only that Raul Gabriel pursues this objective through paradox, showing us how even a painting totally in black can produce a spectacular effect and an impression of light, thanks to the use of the enamels and their irregular and “biological” arrangement on the medium, which leads to a vast range of shades, dialectics and shiny-opaque contrasts.

Alongside the visual artistic project the philosophy beyond his work and approach has been exposed in given lectures and theoretical actions. These are some of them for the period 2010-2017

Paolo Bolpagni, art critic and director of Fondazione Ragghianti of Lucca, writes : «The attempt to combine these outcomes with the contemporary products of the creative talent of an artist like Raul Gabriel, with his Black paintings and White paintings, works that shrink from a clear separation between figuration and aniconism, may seem bold. Two series, moreover, that move in different directions: the “whites”, with their filamentous trajectories, halos and sign-like lumps, in the search for an intimate structure of the real, evoked not by way of “similarity” or analogy but rather by formal equivalents that denote precise entities of the physical being; the “blacks”, thickened with dense enamels and corrugated surfaces, designed as investigations and experiments of pure pictorial fact, the optical and mental make-up of vision, of the refraction of light on matter. Paradoxically, therefore, it is in the Black paintings that we can see a meticulous study of the rendering of the phenomenon of light and its specific nature, in which a theoretical kinship can be identified with the divisionists’ research and methods. ».

Alessandro Beltrami, art critic and art journalist in national newspapers: «In this lie the deepest processes of the painting of Raul Gabriel. Certainly, his works are the outcome of a complex operation in which the margins of decision, control and risk are in flux and so the final result is evidence of an “event” even before the outcome of the project. But the continuous change in time and space in the persistence of the given form ensure that the work is a “living body”. According to the Brazilian pedagogue Paulo Freyre “el mundo no es, el mundo està siendo”. Replace the word “mundo” or world with “painting” and you will have one of
the best definitions of the work of Raul Gabriel.».