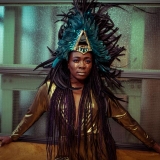 Rachael Young is an award-winning artist and writer based between London and Nottingham. Her interdisciplinary performance practice exists on the boundaries between live art, dance, contemporary theatre and socially engaged projects. Her work creates spaces for intersectional realities to be explored and celebrated and for alternative narratives and forms to evolve and be heard.

Rachael’s most recent shows OUT and NIGHTCLUBBING have received critical acclaim. NIGHTCLUBBING was nominated for the ‘Total Theatre Award for Innovation, Experimentation & Playing with Form’ at 2019’s Edinburgh Fringe Festival and Rachael was named an Artist to Watch 2019 by the British Council. OUT won the 2017 South East Dance ‘A Space to Dance’ Brighton Fringe Award and was nominated for the ‘Total Theatre & The Place Award for Dance’ at the Edinburgh Festival Fringe 2017. She is the recipient of the inaugural Eclipse Award, which supported this year’s run of NIGHTCLUBBING and OUT at Edinburgh Fringe.

She was part of 2018/19 ‘BBC Writers Room: London Voices’ and a writer of the Royal Court’s Queer Upstairs: an evening of rehearsed readings of new short plays to mark the fiftieth anniversary of the Stonewall uprising.

Rachael also works as a lecturer, mentor and outside eye for other artists. You can follow Rachael on Twitter @Rachaelraymck