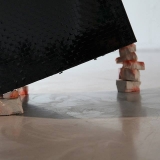 Nicky Teegan (born 1987, Dublin) is an artist based in London. She completed her MFA at Chelsea College of Art and Design, London and studied her BA in IADT, Dublin. She is currently the arts coordinator for Julie's Bicycle and is a founding member of Ormond Studios, Dublin.

2014
‘At dawn we will stand in a circle, as the sun rises it will renew the souls of the pure’a two person exhibition by Nicky Teegan and Conor Foy, NCAD Gallery, Dublin, April/May 2014
'Studio. Tomorrow. Buy Me Things Like Machines', group exhibition, East Street Art Gallery, London, January 2014