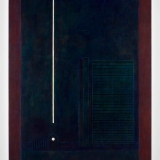 Practice includes painting, drawing, photography and installation. Main focus is painting, however, other media explored that may be appropriate to several recurring themes that are rooted in an interest in spatiality and perception. Paintings depict light and darkness, while photography playfully explores subtle subversions of ordinary objects and space. For example the Heterotopia series brings together notions of 'otherness' within familiar objects that allude to the body.

Originally trained as an architect at Canterbury College of Art, career has involved collaborations in architectural and public art projects in the UK and abroad as well as exhibitions at galleries and festivals such as Arte Laguna Prize exhibition (Arsenale, Venice), Dilston Grove, Wimbledon Space and Fabbrica Europa (Florence). Also engaged in teaching within both fine art and architecture (Architectural Association, Camberwell College of Art, University of Cambridge) for many years. Recently co-curation and exhibition in 'Between Thought and Space' at Camberwell Space and Dilston Grove, London.

Koppel Project Hive, London, May 2017. 'Right Through You' with Nicolas Feldmeyer and Richard Wentworth. Curated by Alice Bonnot - Group show