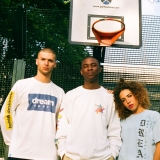 I am a graphic designer who has been working at Dream But Do Not Sleep Clothing since September 2011. The majority of my work focusses on geometric patterns, 1990s nostalgia, and illustrations. I've always been drawn towards colour and every collection I design feels like a summer collection.

Geometric patterns are the most prominent theme you will find in my work. I create all patterns in Illustrator and stick to a colour palette of red, blue, yellow, and green for most designs. I have also created geometric patterns which are influenced by 1990s nostalgia and use more organic shapes and colourways you would expect of the 1990s era.

More influences of mine are 1980s/90s Science Fiction graphics and posters for club nights. They were usually created with airbrush or early Photoshop and followed a theme of grids, gradients, and 3D lettering. This aesthetic is something I have followed for some of my more resent designs, and I'm looking to explore this further over the next year or so.

Playful graphics are something I often create as well. The most popular design has to be the 'Free Range Designs' graphic I created in 2014. I was spending a lot of time in South East London at the time and I couldn't help but notice all the Chicken shops which were on almost every high street. I would chuckle to myself at their names such as 'Perfect Fried Chicken', 'Best Fried Chicken', and 'Quality Fried Chicken'. I quickly decided to create a design inspired by these chicken shops and this is when the 'Free Range Designs' graphic was made. It was a playful take on the chicken shop logos and has been very popular since 2014.

Another one of my skills is photography. I focus on documentary photography, and shoot everything on my point and shoot film camera. I've always preferred the aesthetic of film and I like the idea that you can capture a particular moment in time which will never be repeated. It can be a social occasion with old friends or documenting the clothes I've designed and created over the years, and how they have developed over time.

The designs I've created are available directly through www.dreambutdonotsleep.com as well as through Asos Marketplace, and Depop.