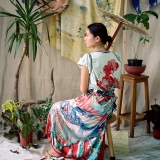 Marta Velasco Velasco is driven by narrative and materiality, working within the fields of art direction, set design and textile design.
Her works are explorations into cultural traditions, colonial history and postcolonial traces. Looking at the tension between the object and the narrative intent, her work uses textiles as communication artifacts. Informed by broad research into her subjects, she plays with fact, fiction and storytelling to create new ways of representing fascinating stories.

TATE Modern | Yami-Ichi by Arebyte Gallery at OFF PRINT | London, May 2016