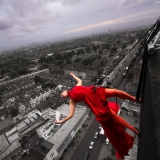 Mark Morreau is an independent digital artist specialising in professional video and photographic work for Circus and Physical Theatre.
Mark's work takes several strands:
• Creating original “dance for camera” / “circus for camera” films.
• Creating material as part of performance, such as projections or soundscapes.
• Creating Video Installation.
• Documenting live shows for companies and individuals.
• Director of Photography
• Working in community projects, either documenting process, or enabling people to express their voices through the medium of video
• Freelance camera operation

Involved in the performing arts for most of his life. First professional engagement was at the age of seven in a Gilbert and Sullivan operetta. Performed in theatre throughout school and university, and after graduation found his true metier in the world of circus. Trained at Fooltime Centre for Circus and Physical Theatre in Bristol, and in aerial skills with Philipe de Coen in Brussels, Jean Palacy in Paris, and at The Circus Space in London. Performed with Snapdragon Circus, spent many years with NoFit State Circus and was a founding member of The Generating Company. Been actively involved with The Circus Space (Now the National Centre for Circus Arts) since it opened its doors in 1990, and continued to teach performance skills on NCCA’s Degree course until 2015.

Retired from performing in 2003, and retrained as a video maker and photographer. Experiences of live theatre have laid a solid foundation for current career. Has a thorough understanding of how theatre operates, not only through performance but from the practical and resourceful nature of the theatre and contemporary circus he has grown up in. Former career necessarily informs current work as a video/photographer in that he has an intuitive empathy with performers and theatre companies and so understands their image requirements.

Jacksons Lane, London: residency as part of National Centre for Circus Arts Lab:Time Squared award of £5,000 to research and develop performance piece "Natalie Inside Out"

Video Installations:
2008 “Trieb”, co-created with Matilda Leyser and John-Paul Zaccarini and commissioned by The Roundhouse and Theatre Le Quai, Angers.
2013 “Take Me To Bed”, a gallery installation about disability and gaze funded by Arts Council England, which won the prize for best overall work at the Light Moves Festival of Screen Dance, Limerick, 2014, and is currently touring
http://takemetobed.org.uk/