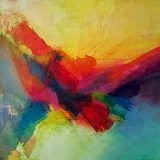 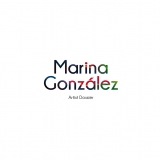 Marina Gonzalez focuses her interest on the consciousness treatment through the creation of artistic stimulus which motivates different physiological mechanisms of perception. Her latest mixed media abstract composition, where she uses paint and collage on canvas, is the connectivity way between the sensitive reality and cognitive response.

She studied Fine Arts at the University of Seville and she specialized in painting. The academic year 2007-2008 Marina González studied in Belgium, specifically in Sint - Lukas Brussels University where she developed her project “Art, Energy and Meditation”. There, she was enriched by new trends and artistic movements.

Throughout her career she has worked in the performance area, video, photography, sculpture, painting and she has participated in numerous solo and group exhibitions in Spain and Brussels.

She has published as an author in the book “Acúfeno como señal de malestar” exhibited at the XXIV Congress of the Andalusian Society of Otorhinolaryngology and Cervical-Facial (Granada - Spain 2010) and also she has been interviewed by Joaquín Mayordomo, journalist of “El Pais” Newspaper for the subsequent article “El runrún de la crisis”.

Also, Marina González has graduated in advertisement and Public Relations by the University of Cádiz (Faculty of Social Science and Communication).

Currently she is living in London as she continues her professional development.