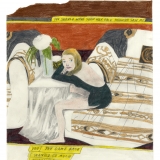 Be young, be wild, be desperate 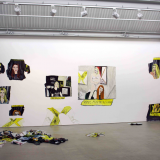 Born in France in1988, Marie Jacotey graduated from an image course at the National Superior School of Decorative Arts in Paris (ENSAD) in 2011 and from an MA in printmaking at the Royal College of Arts in 2013. She had her first solo-show in Paris in March 2013, ‘Shiny shiny’, and has been part of shows in France, Greece and England in the last year.

Marie lives and works in London as a visual artist. Her practice finds its starting point in drawing but takes various shapes as her research process matures, from installation to edition, with a constantly renewed curiosity for a wide range of diverse mediums from fragile monoprints on japanese paper to foldable oil paintings on plastic material. Subjectwise, her pieces reflect her obsession with women she looks at through the prisma of human relationships.

She is also the co-founder of a publishing collective ‘W’ whose interested in producing affordable magazines, hybrids between artist books and comics. W’s last issue ‘Hot babes and tough guys’ can be found in Parisian libraries including the ones of the Centre Pompidou, of the Yvon Lambert gallery and Agnès b gallery.