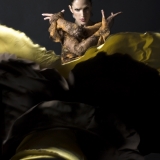 Dancer and choreographer born in Madrid. She began Spanish dance and Flamenco studies in the Royal Professional Dance Conservatory in Madrid and soon after was chosen to be part of the Conservatory company as a soloist. She completed her studies in 1996 with the highest overall grade. She completed her studies in the Amor de dios school with great Flamenco masters such as Merche Esmeralda, Blanca del Rey, Belen Maya, Lola Greco or Rafaela Carrasco, as well as completing her contemporary dance and classic ballet studies. Her first professional work was in 1996 in the Flamenco ballet Luisillo teatro de la danza. In 2000 she was invited to the Nuevo Ballet Espa&ntilde;ol as a soloist. The Directors &Aacute;ngel Rojas and Carlos Rodr&iacute;guez created two pieces for her: A Mar&iacute;a a solo performed in a Flamenco gown Dress, and los Ca&ntilde;os included in the video called Fury New Spanish Flamenco recorded for the United States by NBC. The Nuevo Ballet Espa&ntilde;ol received good reviews from the critics during the international tour 2002-2003: Mar&iacute;a Vega une danceuse tr&egrave;s remarquee pour le supplement d&acute;&acirc;me qu&acute;elle offre &agrave; son corps delie et elegant, Le Journal de L'ile. In 2003 she was employed as the principal dancer by the Antonio Najarro Spanish dance company.
Additionally, she continued to collaborate in different projects with the Flamenco company Carmen Cortes and the Capitole theatre in Tolouse, France.
In 2009 she was invited to play the leading role of the &quot;Belle andalouse in the musical Don Juan by Felix Gray with performances in the main theatres of Seoul.
She has worked as guest teacher in different courses and workshops of Spanish and Flamenco Dance in the Hispanic Ballet of New York, Detroit secondary school, Franconville Theatre (Paris) and the Belem Cultural Center (Lisbon).
As a choreographer In 2003 she creates the choreography Recuerdos del alma which was chosen for the Spanish and Flamenco Dancing Choreography Contest and was presented in the Albeniz Theatre in Madrid in July that year. In 2005 she created the choreography Solo dos exclusively for a celebration in the Eiffel Tower in Paris. As part of her career as a soloist, in 2008 she created the choreography Tierra de nadie and Y yo sigo tu Luz which are solo pieces performed in shows for international dance stars in Portugal and England.
In 2009 she danced as the guest artist with the classical orchestra of Madeira under the direction of Rui Massena. She interpreted pieces from the traditional Spanish repertoire such as the El Baile de Luis Alonso and La Vida Breve.
In 2010 she creates the show De azabache y plata actually in theatres, the premiere of the show took place in Kuala Lumpu, Malaysia with an enormous audience success.
From 2009 she is living between London, Madrid and New york in order to perform and teach flamenco and Spanish dance around the world.