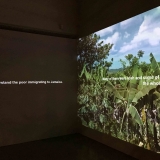 Marianne Keating is an artist based in London. She is a PhD candidate in Visual & Material Culture and Contemporary Art Practice at Kingston University, London. She graduated with an MA from the Royal College of Art, London, and a BA from Limerick School of Art and Design, Ireland.

She has exhibited throughout Ireland and internationally, including London, Paris, New York, Melbourne and Shanghai. She is currently preparing a solo show for the Crawford Art Gallery, Cork, Ireland in June 2019.