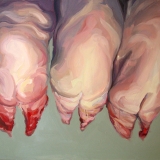 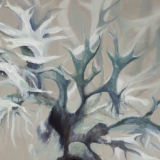 Born in 1989 in Poland. In 2009 she graduated with distinctions from Art Secondary School in Supraśl. She continued her education in Gdańsk Academy of Fine Arts where she did Masters in Painting. She also holds Bachelors in a graphic design. Both in 2015. Since then, she works parallel as painter and graphic designer.