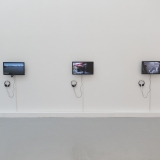 Born in Bremen, Germany, Maike moved to London in the mid 90s where she first studied French and then went on to Art School. She lives in London, Bremen and Berlin and works mostly image based (photo, video, 16mm, super8) creating experimental films, video installations, audio visual performances, photographic or site specific work. She has also made sound recordings for experimental radio shows teaching Hawaiian language in Hawaiian to the listeners. Her work has been shown internationally including exhibitions in Barcelona, Berlin, London, Monaco, Helgeland (Norway), New York, San Francisco, St.Petersburg and Stockholm.
In 2011/2012 she was artist in residence at no.w.here (now: Not/no.w.here) an artist film space in London and has been commissioned by the Victoria & Albert Museum for numerous video and photography projects and teaching workshops on sound and moving image (in collaboration with Jason Singh). She has been a recipient of the Grant for the Arts (Arts Council England) and the Promos Travel bursary (DAAD) in 2013. Maike has also been part of the artist in residency program at Art Base, Helgeland with ZK/U, Zentrum für Kunst und Urbanistik, Berlin, 2014. In 2015 she received the International Development Fund from the Arts Council England/British Council for an artist residency in New York (Harvestworks and Outpost Artist Resources). For the project [city]Frequency Maike has received a grant from the Arts Council England in 2017. Her curatorial work includes the successful exhibition drama, baby! in Berlin with the artist collective UNST and 'an evening of audiovisual performance art' at the Horse Hospital, London including performances by Matthias Kispert (D-Fuse), Blanca Regina and Iris Garrelfs. [city]Frequency was successfully shown as a solo exhibition at A.P.T Gallery, London, UK (March/April 2018) and in the special section 'videoart' at the 4th Filmfest Bremen, Germany (September 2018).