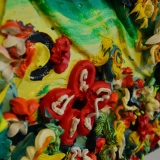 With a unique and physical approach to painting, Laura Iosifescu’s portfolio comprises wonderfully colourful, abstract and 3D forms.
Nature and Geology inspires Laura`s work but the everyday life`s events and experiences influence how her landscapes evolve and express .
Working in an experimental style using machines, a combination of tools and thick layers of acrylics and oils, Laura’s unconventional abstract paintings can never be recreated. Visually bold and very tactile, the 3D creations are Laura’s attempt at taking control and breaking through society. “I come from a country with many rules and restrictions and after moving to the UK, I have flourished and my art is an expression of that; I have the freedom to experiment and create my own unique style.”
With built up layers of bright and striking colours, Laura states that her use of colour is a symbol of her love of life. “Living in London, it’s like a sea of cultures. When you are a creative individual, you tend to be very open-minded and embrace everything; which is what I try to capture in my art. Flowers and landscapes are very colourful anyway, and colour is something that is appreciated on a global level.”
Laura’s painting process is also quite physical and draining. “I never know what I’m going to paint, it just comes to me. When I paint, I go into a trance where I forget what is around me. When I finish, I always feel exhausted. It’s like I’m a tool; a medium through which these artworks are created.”