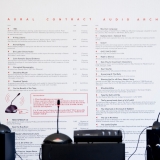 Lawrence Abu Hamdan’s (b.1985 Amman) work deals with the relationship between listening and borders, human rights, testimony, truth and law, through the production of audio-visual installations, graphic design, sculpture, photography, workshops and performance. His work with sound and its intersection with politics originate from his background in DIY music. His work was submitted as evidence at the UK asylum tribunal where the artist himself was called as an expert witness. His solo exhibitions include The Freedom Of Speech Itself (2012) at Showroom, London, The Whole Truth (2012) at Casco, Utrecht and most recently Tape Echo (2013) at Beirut in Cairo His works have been part of group exhibitions at Tate Modern London, M HKA Antwerp, Van AbbeMuseum, Eindhoven, the Beirut Art Center and The 2012 Taipei Biennial. Abu Hamdan’s writing can be found in Forensis Sternberg press, Manifesta Journal and Cabinet Magazine. Abu Hamdan curated events at the Reitveld Academie in Amsterdam and at Batroun Projects Lebanon. He is part of the team Forensic Architecture at Goldsmiths College London where he is a PhD candidate and lecturer.