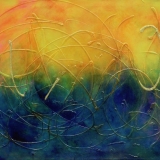 Kristin Taylor paints in an intuitive way and the viewer is invited to respond similarly, feeling the visceral impact of the pieces. Aside from a fascination with intense emotions and colour, at the moment, she is mainly influenced by spirituality and nature. She creates abstract, atmospheric paintings that represent energy, potential, dreams, beauty, the universe, and sensuality beyond logic and reason.

Kristin mostly paints in oils. She also works in sculpture, mixed media and photography. She has exhibited her work internationally, specifically in London and in the USA. Her artwork is held in private collections worldwide. She also curates exhibits in London.

Kristin earned a Bachelor of Arts in Studio Art from the Colorado College in Colorado Springs, USA, and also attended the Ecole des Beaux-Arts (School of Fine Art) in Perpignan, France. She holds a JD and LLM from Tulane University.

She owned her own commercial art business as a teenager. During university, she worked as a letterpress art printer and designed bespoke tattoos.

Kristin is based in London and works out of a studio in South East London. She originally is from Colorado Springs and has lived in New Orleans, Perpignan and Paris. She enjoys the multicultural, buzzy atmosphere of London and travels often.