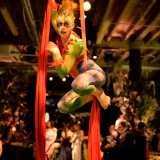 My name is Kitty Hawkins and I'm a London based Costume Designer, Maker and Supervisor.

I enjoy both the design and construction of costumes and believe that to be able to do either well you should have a thorough understanding of how it works from both sides.​
​
As Costume Designer:
Resident designer and maker for burlesque club The Box, Soho (2016/17), Airborne and Prometheus Drowned (Nova Music, 2014), I Dig Myself A Hole - (Film by Balan Evans, 2014), Habeas Corpus, The Lincoln Company -The Riverhead Theatre (2013).
​
As Assistant Costume Designer:
Blavatnik Peace event at Wrotham Park (2017)
​
As Costume Supervisor:
Summer In London - Theatre Royal Stratford East (2017), The Braille Legacy -The Charing Cross Theatre (2017), Death Takes a Holiday -The Charing Cross Theatre (2017), Ragtime - The Charing Cross Theatre (2016), Karagula- Soho Theatre (2016), Deathwatch- The Print Room (2016),
​
As Associate Costume Supervisor: Mrs Henderson Presents- Noël Coward (2016) , The Winter's Tale- Garrick (2015), Harlequinade- Garrick (2015), A Damsel In Distress- Chichester Festival Theatre (2015).

As Costume Maker:
I have making experience in wardrobe departments such as Scottish Opera (Glasgow) and Laban Dance Conservatoire. I've worked as puppet maker for The Old Vic on 'The Lorax' and for Les Petis on an adaptation of David Walliams 'The First Hippo On The Moon'.