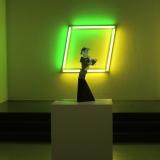 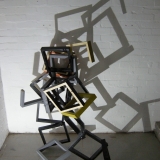 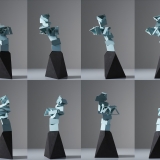 Kevin Callaghan's work investigates ideas and conjectures about Utopian philosophy and science fiction. He wants to question and address the limitations of the human condition, revealing the simplicity of how we all travel consciously or unconsciously through the third and fourth dimensions of time and space. These conceptual goals directly reference his concerns with how and where science and the visual experience of art meet.

Kevin uses simple universal mathematical structures such as the triangle and square as a point of departure. These are treated in contrasting colours in order to maximize optical dynamism and vibrancy. The geometric structures intertwine, appearing precarious and spontaneous, this dynamic state attempts to question notions of order and chaos.

Callaghan is searching for a means to portray the notion of 'travel' weather inter-dimensional or as a reality outside and unknown to us all. These visions of new perspectives of high-density reality or non-reality aim to penetrate a kind of outer space comprising a dream like world where reality meets conscious dreaming. In this forward thinking role ideas about Anticipatory Consciousness are examined and in particular how they connect to or are attached to objective reasoning, allowing questions of curiosity and wonder about the cognitive state to be explored.