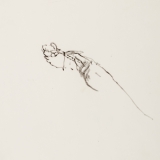 Recently completed the postgraduate 'Drawing Year' at the Royal Drawing School; awarded the Trustees Prize. Graduated from Goldsmiths in 2010 with an MA in Art and Politics.

Has exhibited in London, Oxford and the South East, in both solo and group shows. Has programmed and curated a month-long arts festival in Oxford that celebrated the ancient and no less beguiling paper sheet, and all the things that can happen on it. Included a changing exhibition program, celebrating painting, printmaking and drawing; a program of workshops – for children and families and as professional development opportunities – talks and events complementary of and complemented by the exhibition program.

Has run workshops for professional artists, and children, including: Big Draw 2015 at the Bodliean Library in Oxford for all ages; collaboration workshop for artists working with images and text; and a series of drawing workshops at the Pitt Rivers Museum, University of Oxford.

Worked as part of small team on an Arts Council funded new work and collaboration platform for artists of all sorts and flavours. This included the planning and delivery of a one-day arts festival as well as a regular monthly event.

2017: The Best of the Drawing Year, Christies, London

2010: Paper and Pens, The Gramaphone, London

2014: Makers’ Month: 2D: a month long arts festival championing the ‘flat arts’, with a changing exhibition schedule of shows dedicated to drawing, painting and printmaking, plus a programme of workshops, talks and events.

2013 - 14: co-organising Playground, a monthly new work and collaboration platform for artists of all disciplines, including co-organising a one-day festival. Funded by Arts Council England

2014: 10 week series of drawing workshops culminating in an exhibition with the Pitt Rivers Museum

2012: An Aesthetic of Landscape: talk at Playground