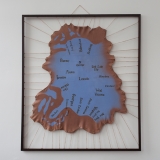 On my first visit to an NHS hospital in London, I was asked to fill in a form stating my ethnicity. I didn’t know what to answer.

It was only when I moved to London in 2009 that I was confronted with the matter of national identity. Here, I am constantly asked to explain why my surname is Russian and my passport Italian, whilst I myself am Argentinian; why I celebrate Easter and Passover when in fact, I do not believe in God and moreover, my parents are atheist psychoanalysts.
My mother’s parents were Italian immigrants and my father’s grandparents, Jewish Ukrainians. In Argentina this is very common. I had consequently given little thought to the issue.

Emigrating has allowed me to view things from a different perspective. With renewed cognisance of indigenous populations, I began to feel like an intruder in the country that I had seen as my own. No longer could I see Argentina’s independence as a positive development; the creation of the country feels like a European construct. This shift in perspective has given me a better understanding of the fundamental role displacement has played in the geopolitics of our time.