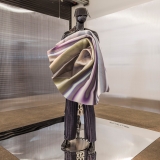 Graduated in 2012 At London College of Fashion , Kay Kwok debuted his collection to critical acclaim at London Fashion Week in 2013 and is known for his futuristic and contemporary menswear with creative print design. Based in London, he has interned with Alexander McQueen when studying.

His graduate collection placed first in Mittelmoda, an international fashion competition, making him the first Chinese fashion designer to win the accolade in the past 20 years. Kwok has also collaborated with numerous world-class brands and organisations including Sony. The label is a favorite with music talents including Muse from UK, SHINee from Korea, and artists like A-Mei, Joey Yung and Landy Wen, etc..