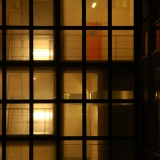 My practice investigates various aspects of the world of work in order that a greater understanding of employment and its role in our lives can be understood. The medium I use for this investigation is action/gesture or less specifically; work. I use this methodology of medium within the (exterior) working world or within the (interior) studio environment. From the exterior, I process and distil the experience had into the display seen in the gallery context. From the interior, the work is more a process in itself and may or may not resolve to a galleried display. I use myself as the vehicle and the site for this action/gesture or work. As a consequence of my own experience and knowledge the work concentrates on the lower paid or minimum wage workers of the UK; the workforce, and is greatly informed by my experience of the work (and the roles within work) that society sets aside for women.

It is the constant repetition of a working system, no matter how destructive, that normalises it for an employee, I use similar methods of repetition in order to highlight this effect.

Currently, I am performing seemingly redundant work tasks in a repetitious manner as a means to investigate the very physical nature of work.

Citywide: May 2006, Swansea City
Co-organiser and exhibiting artist for this collaborative events-based project across Swansea city

Work is in private collections internationally.