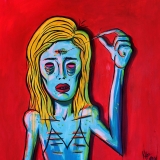 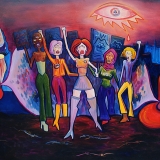 Kat Hudson (Katherine Fawcett Hudson) is a Contemporary Pop-Surrealist artist and independent curator, currently living in and working out of a converted button factory in the Artists’ Warehouse District of North London UK.//

Working mostly in oils and inks Kat’s paintings read like a mirror to the community she has found herself in in London, whilst also reflecting both English and American sides of her upbringing.//

Kat’s collage works often have a humorous edge stemming from her infatuation with cutting, pasting, and repurposing images that were originally created for an alternate intent.//

Kat studied curatorial practice at Tate and is co-founder and director of LGBTQ+ pop-up gallery, The Retro Gallery London, situated above popular gay venue The Retro Bar in Charing Cross.//

​A frequenter of the queer club scene, and part of local queer activist art collective, her work reflects and celebrates her community whilst discussing sociological and political issues surrounding her and her peers. These include political activism, social acceptance, human rights, gentrification, subculture, and what the future holds for her community in the changing face of our capital city.//

Kat has been putting on exhibitions and events in London for over two years; including, in early 2017, FAT LiP [Art, Performance, Protest] a group exhibition come club night celebrating diversity within the queer community. Kat is also the curator of The National Trust Prejudice and Pride 2017 October season exhibition Light After Dark at Sutton House in Hackney, September 27th - November 3rd 2017.//