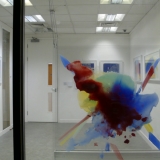 Judit born in Barcelona. She started having interest in drawing and painting since her childhood. Later late nineties she did a course of Photography, where developed interest in this technique. She completed a Degree in Interior Design in 2002. She started painting in Oil in 2009 a year after, Judit moved to London and finished a part-time 2012-14 Foundation Diploma Course at the Hampstead School of Art with a distinction. At the Rootstein Hopkins Drawing Exhibition 2013 she was selected for a Tate Modern Community Learning Award. Her first solo exhibition was in Barcelona in January 2015.

In my artwork I use nature and other personal interests as sources of inspiration. Since I started painting in 2009, my artwork have had an evolution from I started capturing the beauty that it had an impact to me and gradually shifting to a more deeper level through my meditation practice, connecting to nature everyday and during the process of creating each piece. Where colour and form take a journey from representation towards abstraction, an open-ended journey which allows a sense of freedom and expression.

I explore different techniques such as oil painting, mono-print, linocut and photography in pursuing my art. This helps me to have a range of expressive ways to go further in my making process.