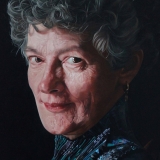 Born in Newcastle in 1989, I am a hyper-realist portrait artist living and working in London.

I paint in a way that is highly meticulous, producing portraits with a heightened sense of realism, where every surface detail is given equal consideration.

After completing a Foundation in Art & Design at Edinburgh College of Art, I studied Fine Art & French at the University of Aberystwyth, graduating in 2014 with a First Class Honours. I also spent a year in Paris studying Art History at La Sorbonne.

I was recently elected an Associate Member of the United Society of Artists. Currently living in Camden, I divide my time between working on private commissions and independent projects.

BP Portrait Award 2016 - short-listed. (Final Round of judging in March)

Degree Show – Aberystwyth School of Art, May 19th – May 30th